Bull in the Headlights

Investors have been handed a full plate of worries to digest in the second quarter. On top of the long-standing issues of extremely high valuations and record levels of margin debt, we can add the European Central Bank’s announcement of their plan to wind down quantitative easing. And, finally, the latest worry to plague investors is the unlikely turn of events that led trade war rhetoric to evolve into trade war reality. Yet, investors have remained steadfastly bullish in spite of these concerns. Do they see something we don’t, or, like a bull caught in the headlights, are they unable to move for fear of missing out on further gains?

We discussed the implications of the US Federal Reserve’s unwinding of their bond buying program, “quantitative easing,” in the May 2018 Market Outlook. This month, the European Central Bank (ECB) joined them, laying out a timeline for slowing their bond purchase in the third quarter, then end the program entirely at the end of the year. The ECB had not been expected to lay out so clearly its plan for “quantitative tightening” (QT), so markets took the announcement as significant. This will further drain the global pool of liquidity and, we believe, put downward pressure on asset prices.

This is coming at exactly the same time as proposed tariffs on imported goods threaten a trade war. If anyone in the White House thought our trading partners would meekly accept these trade restrictions, they were rudely awakened to find a belligerent response among them all. From Canada to Europe to China, foreign countries denounced the proposed tariffs, and quickly countered with some of their own. The result has been a free for all of finger-pointing, but most importantly, has seriously dented the business confidence and spending plans that policymakers have been trying to reinvigorate since the 2008 recession.

Iconic American brands such as Harley Davidson and Jack Daniel’s maker Brown-Forman Corp. have been targeted initially. They have warned investors of the impacts tariffs will have on their businesses, but may just be the canaries in the coal mine. Wall Street should expect more companies to disclose pain ahead when they report second-quarter results in coming weeks as the list of goods in the crosshairs of major trading partners like the European Union, China and Mexico grows.

Except for very brief sell-offs, investors seem immunized to these developments, and fundamental concerns have been forsaken in the quest for momentum. Having gotten accustomed to a bullish environment has reinforced the “buy the dip” mentality, where it seems traditional yardsticks of valuation, risk, and long-term investing seem to not matter at all. It is as if these investors have become so mesmerized by the short-term momentum of stocks that, like a bull in the headlights, they are failing to see the changes that are occurring around them.

Nowhere is this more evident than in today’s love affair with growth stocks. Growth stocks are those where the underlying company is expected to grow earnings, revenues, or both, at high rates. According to finance theory, high growth rates should reward investors with higher stock prices.

This has certainly held true for today’s favorite, the technology sector. Led by the FAANG stocks (Facebook, Amazon, Apple, Netflix, and Google) the sector has been pulled ever higher by robust earnings and expanding growth expectations. But as market history has shown many times over, high expectations can morph into unrealistic ones. At some point investors must ask whether expectations have gotten beyond what these high flying companies can reasonably deliver. This phenomenon was on display in late June with some notable disappointments, and swift share price declines, based on less that “perfect” outlooks from company managements.

This same attitude can be found in the bond markets. Investors have been pouring money into junk bonds for several years now as the fear of missing out has overwhelmed the fear of default. Junk bond yields are now in the 5-6% range, which is what high-quality Treasury bonds yielded prior to 2008. In today’s world of (still) repressed interest rates, bond investors have thrown caution to the wind and continue to buy any dip in junk bonds. It is well known that the biggest risk with junk bonds is a recession, when cash flows drop and servicing the debt becomes more difficult. Junk bond buyers, though, are acting as if that rainy day will never come, and continue to feed this increasingly risky sector with positive cash flows.

We believe that investors are paying too much for growth stocks today. This view stems from a combination of financial reality and herd behavior. The financial reality can be seen in the valuation levels of the technology leaders, especially those in the internet group.

Undervalued stocks have a GARP less than 1.0, such as a stock with a p/e of 15, and an expected growth rate of 20%. In this case, the GARP is 15 ÷ 20 = 0.75, or undervalued. The p/e is underdiscounting the growth rate. These are the kinds of stocks Warren Buffet would be interested in, because they are considered “value” stocks.

Overvalued stocks, however, have a GARP that is significantly above 1.0, which would occur if a stock had a p/e of 30 combined with expected growth of 20% (30 ÷ 20 = 1.5, or overvalued). The p/e is overdiscounting the growth rate.

The market darlings of the growth world are rife with stocks sporting GARPs of 2, 3, 4, and even higher (based on Value Line data). These are not just overvalued, but they have entered the upper reaches of overvaluation. History has shown time and again that these high valuation levels cannot be sustained indefinitely. We believe that growth stock valuations will have to fall to more reasonable levels before they are attractive again as long-term investments.

Herd behavior also points to investors paying too much for growth stocks. Led by Wall Street’s analytical cheerleaders, we are seeing a replay of the groupthink that preceded the 2000 and 2008 market tops. In 2000, it was the internet and telecom stocks (remember Qwest?) that were forecast to grow to the sky. In 2007-08, it was the banking and mortgage stocks (remember Washington Mutual?) that captured the popular sentiment of the day. In both cases, the bulls bought relentlessly until the weight of valuation, cyclical slowdowns, and a few initial bankruptcies turned the bulls into chickens and led to major sell offs in those sectors. Who was left holding the bag? Individual investors, the group that is always the last to get the message to sell, and who mistakenly believes Wall Street has its best interests at heart. To repeat, investors are paying too much for growth stocks today.

It is time to start looking at “value” oriented stocks and mutual funds. The market is littered with stocks with GARPs less than 1.0, and they are going begging because of today’s fixation on growth names. The gulf between growth and value stock performance has seldom been greater. This difference is glaringly apparent when looking at the “relative strength” of the two groups. The charts below compare the Vanguard Growth Index Fund (VIGIX) and the Vanguard Value Index Fund (VIVIX) to the S&P 500. When a relative strength chart rises, it means the security is outperforming the market, while a chart heading toward the bottom of the page indicates underperformance. Clearly, Vanguard Growth has outpaced the market, and left Vanguard Value in the dust. 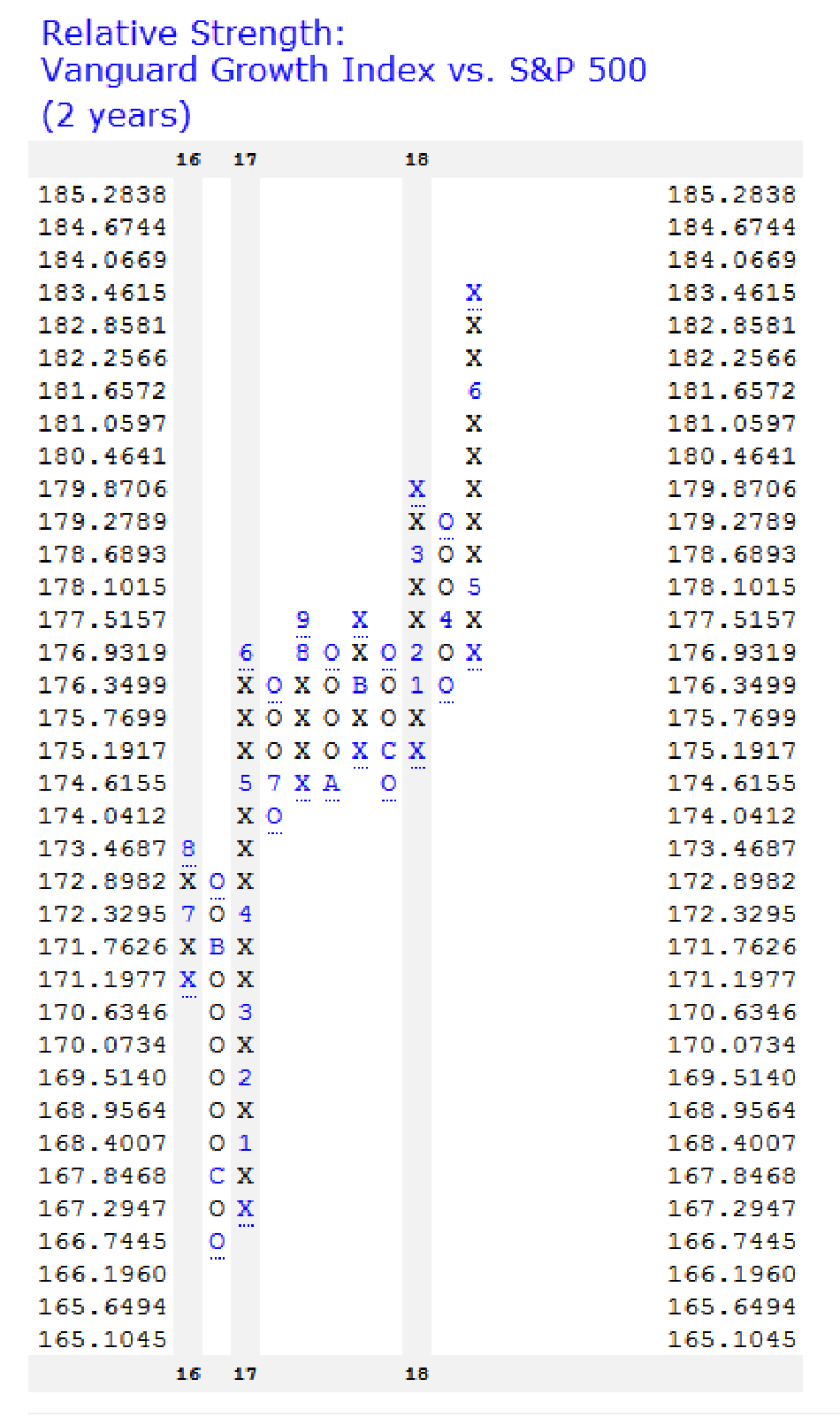 These charts are presented to show the current disparity between the two philosophical styles, and should not be taken as a recommendation. However, when the relative strength rubber band gets stretched this far, it is time to watch for a reversal of fortunes. When the relative strength chart of Vanguard Value begins to rise (i.e. reverses into a column of Xs), that will be the first clue that a change in the wind may be occurring. It may happen this year, or next. There is no way to tell the timing at this point. All we can do is watch the charts for changes. But we do know growth and value alternate periods of outperformance, which can last several years at a time. The outperformance of growth stocks has lasted quite a while, lulling investors into the belief that this trend will always be in place. However, like a bull in the headlights, they may be caught up in the euphoria of the moment and unwilling to consider alternative outcomes. 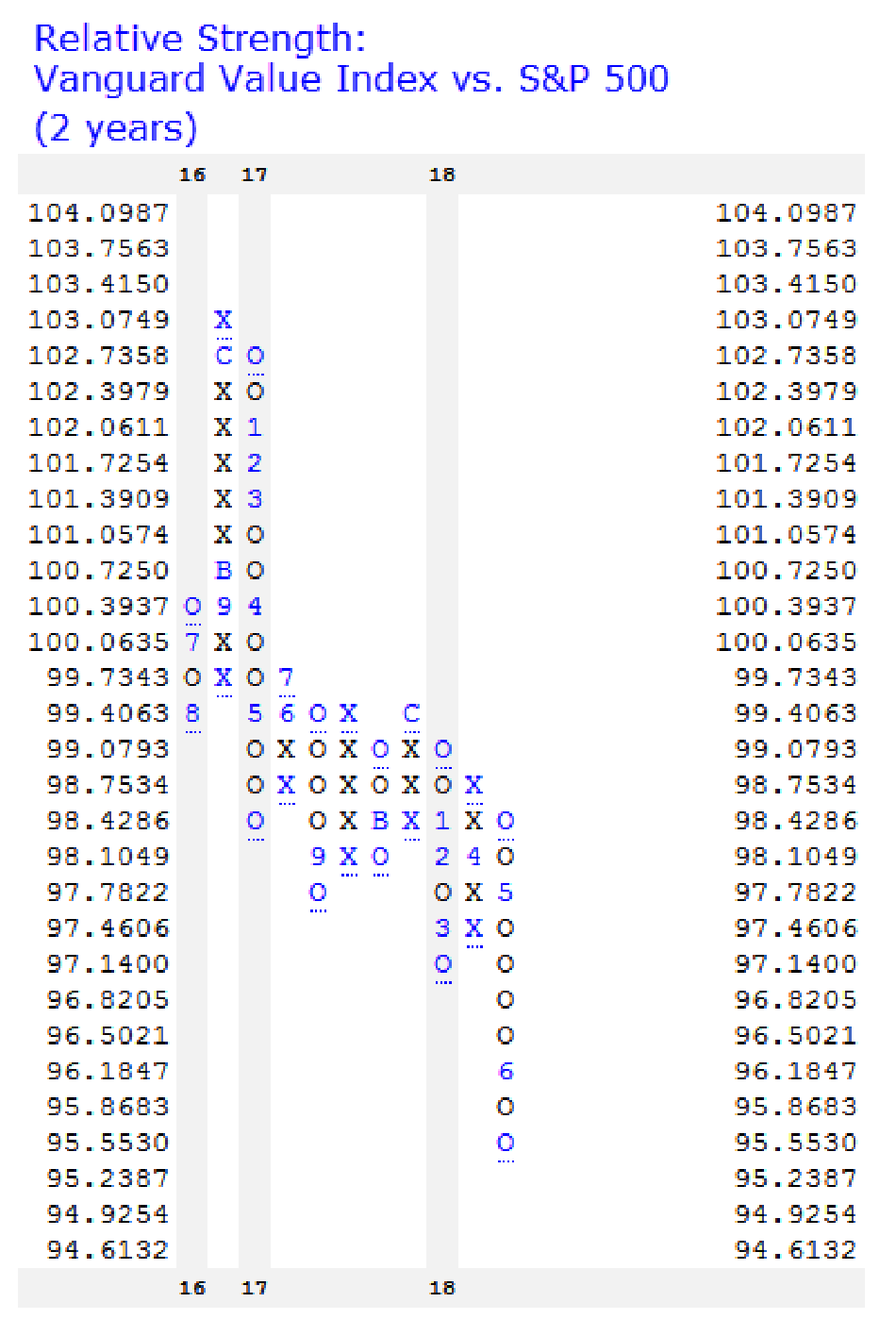 It is time to recognize the risks inherent in today’s popular growth stocks, and look for signs that value stocks are about to have their day in the sun.