The Free Lunch is Over

Investors relearned the meaning of risk in February as the euphoria that started the year was quickly snuffed out by a dramatic decline in stock prices. The fear of rising interest rates combined with the prevalence of automated trading to trigger sell orders and push markets down some 10% from the end of January to mid-February. The drop included two 1000 point declines in the Dow Industrial Average in the same week, putting an exclamation point on the reversal of fortunes. Investors have not experienced a decline of this magnitude since early 2016, so they were understandably shaken. On cue however, Wall Street pundits were quick to trot out soothing comments about this being a normal and healthy correction, trying to stave off feelings of panic among the public. However, we believe this incredible volatility was more than just a simple correction; it is an indication that Wall Street’s free lunch is over.

The first free lunch that investors have enjoyed in recent years is a remarkable lack of downside volatility. The market has gone through a uniquely quiescent period recently, where the dips were extremely shallow and brief, and aggressive investors quickly pounced on any weakness to push stock prices up to new highs. Political travails in Washington, threats from North Korea, and rising fears of inflation have been unable to dent bullish sentiment. Thus, investors have been lulled into complacency by a market that seemed to have no downside, and where there was no penalty for ignoring risk.

We believe that investors should expect a return to more normal levels of stock market volatility going forward, as the normalization of monetary policy (below) takes the risks of overvaluation and overleverage out of the realm of theory and into reality.

The second free lunch that’s fading away is the artificial repression of interest rates at unrealistically low levels. The Federal Reserve (and other central banks) have been using “quantitative easing” (QE) over the last nine years to suppress interest rates in an effort to allow overleveraged individuals and institutions the opportunity to refinance and repair their balance sheets after the credit bubble collapse of 2008. But now market interest rates have risen as the domestic and global economies have enjoyed a synchronous upward surge, made even more strong by the stimulative effect of the recent tax reform act. The Fed probably overstayed its welcome at the QE punchbowl, having only recently begun raising rates, and now these same market forces are forcing the Fed’s hand. They find themselves behind the curve as economic strength is out of balance with interest rate policy. 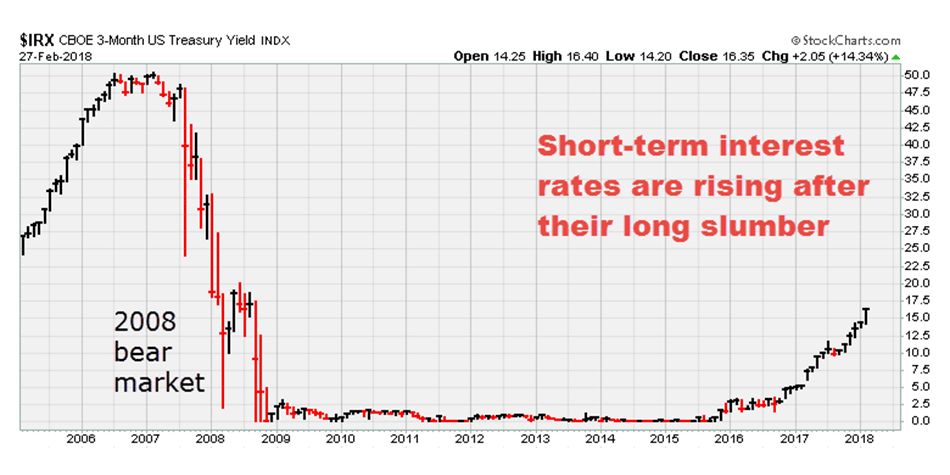 While near-zero interest rates had the effect of encouraging borrowing, it also provided an artificial tailwind for stocks. The now famous acronym TINA (there is no alternative) can be traced directly to this phenomenon, as fixed income investments were shunned due to their low yields and haven’t, until recently, been a viable alternative to stocks. If the Fed raises rates consistently in 2018, which seems likely, higher interest rates will provide an attractive alternative to stocks, especially if bouts of downside volatility become more frequent, causing investors to seek shelter in traditional fixed-income sectors.

Third, the free lunch of liquidity is beginning to reverse. One of the greatest boons to Wall Street over the last nine years has been the constant creation of liquidity by the Fed. The Fed has used their ability to create cash within the financial system to help the recovery from the 2008 bear market. This has boosted paper and “real” assets, creating inflation in the financial markets rather than in consumer goods and services (i.e. the consumer price index). In this sense there was a free lunch, too, because consumer inflation has stayed low, while asset prices have soared, resulting in the best of both worlds.

Now QE is evolving into QT (quantitative tightening). In 2017, the Federal Reserve laid out its program for reducing its bond holdings as the economy normalizes. While the media focuses on the Fed’s rate hike decisions, they often miss the bigger issue of the reversal of liquidity flows that QT implies.

Is it any coincidence that stocks dropped so abruptly as the Fed began its QT program in early 2018? We don’t think so. The new Fed chairman, Jerome Powell, is no fan of QE (to his credit). Moreover, Mr. Powell is no fan of the knee-jerk bailouts that the Fed has bestowed on Wall Street every time the market swooned. Putting the two together implies that we should expect the systematic QT program laid out last year will be carried through with, and that Wall Street should count on the Fed being less accommodative to its fainting spells in the future.

Where does all this leave investors? We have highlighted the triple risks of overvaluation, overleverage, and overly bullish sentiment in past issues of the Market Outlook. Valuation has hardly been dented by February’s correction, and remains solidly in overvalued territory. Based on the research of Doug Short (www.DShort.com), stock market valuation is more than 2 ½ standard deviations above the mean of historical valuation. This is second only to the all-time blow-out high valuation of the internet bubble of 2000 (more than 3 standard deviations above the mean at the time) and well above the third highest peak set in 1929. Therefore, we should not fool ourselves into thinking the recent correction has created a lot of good values in the market.

Margin debt rose to new highs in January as the post-tax-reform rally prompted investors to get even more leveraged. We expect the February margin data, available shortly, will show some reduction in leverage. It is the nature of margin debt that it falls after stock prices start falling, not before. Thus, it is a trailing indicator of behavior. Nonetheless, margin debt levels are still high, and we can expect them to drop to low levels only if stock prices trend downward.

Bullish sentiment definitely reacted to the market’s correction, for a small positive change to the risk picture. Bullish sentiment, as measured by Investor’s Intelligence, fell from a 32-year high of 66.7% of advisors to 48.1% over the past six weeks. This rebuilds the “wall of worry” that stocks are said to climb, and allows for the possibility of a rebound in the near term. However, the former bulls didn’t become outright “bearish” on the market, but rather moved to a “correction” opinion, which implies they expect stocks to move higher after this sell off.

Outright bearish opinion remains stuck near 32-year lows at 14.4%. From a contrarian view, this very low percentage is worth keeping an eye on, as it implies that advisors aren’t yet willing to call an end to the bull market. In other words, hardly anyone is willing to go out on a limb and issue a negative outlook, a behavior that is consistent with market peaks. When bearish opinion reaches 45-55% you’ll know a major low has been reached. Overall, we would rate bullish psychology as neutral, an improvement over previous months.

We’ve pointed out that overvaluation, overleverage, and overly bullish psychology are conditions that describe the level of risk in today’s market, but by themselves they are not sell signals. February’s volatility provided some changes among market measures where sell signals should be taken as a sign that a more defensive stance is warranted.

The NYSE Bullish % measures the percentage of stocks on the NYSE that are on buy signals, using the point-and-figure charting method. Unsurprisingly, it gave a sell signal in February as hundreds of stocks gave sells, thus lowering the NYSE Bullish %. From a 2018 high of 72% it fell to 54% (of stocks on buy signals). The market has had a strong rebound rally over the last few weeks, with the Dow Industrials jumping 200 or 300 points a day at times, but this has not been enough to reverse the basic message of caution from the NYSE Bullish %. There are similar measures, maintained by Investor’s Intelligence (www.InvestorsIntelligence.com), for the Dow index, the S&P 500, NASDAQ, and small- and mid-cap indexes. They have all given sells this month, and while they have rebounded to different degrees in recent weeks, the sells remain in place. 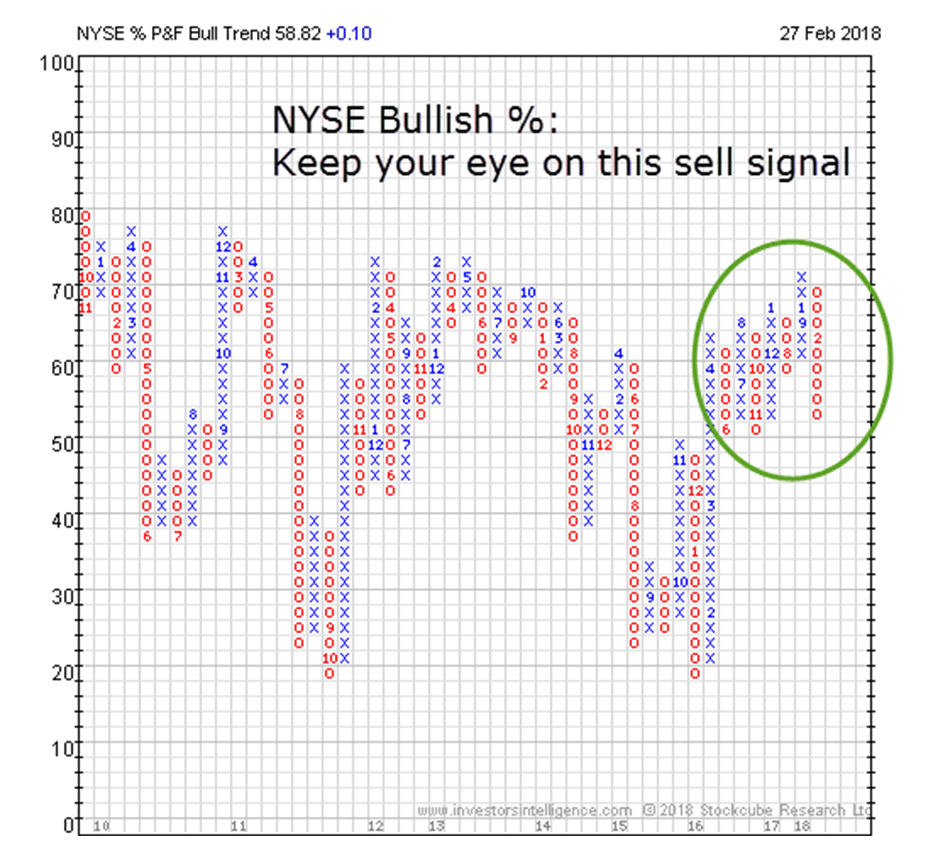 Benign “corrections” would see these Bullish %s reverse course, but maintain their bullish status. The fact that a broad swath of Bullish %s gave outright sells support the idea that maybe a bigger downtrend is in the offing. We would rate this factor a negative now, and while a counter trend rally can continue into spring, we would urge investors to avoid falling for Wall Street’s bland reassurances that the worst is over.

A second key indicator is the NYSE advance/decline line. It currently holds bullish status, and thus has not confirmed the message of the Bullish %s. The advance/decline line has been on a near vertical ascent since the 2016 election, reflecting the bullish trend in the markets. This month’s volatility has caused many more negative daily breadth readings, and in doing so has brought a potential sell signal within reach. The ups and downs of advance/decline numbers cause the iterations from X columns (rising unit values) to O columns (falling values). A “sell” signal is given when an O column falls below a previous O column, and is simply an organized way to observe when values are starting to set a series of lower lows, the definition of a downtrend.

As the chart indicates, the sell level is seven boxes below the chart’s current level, at “495,000.” Realistically, it would take a couple of weeks of negative advance/decline breadth to get down to this level. If indeed we are only in the midst of a benign correction, this indicator should stay bullish, and the fact that it is presently in Xs (rising unit values) is a positive. We would rate this indicator as positive right now, and a counterbalance to the message from the NYSE Bullish %s. 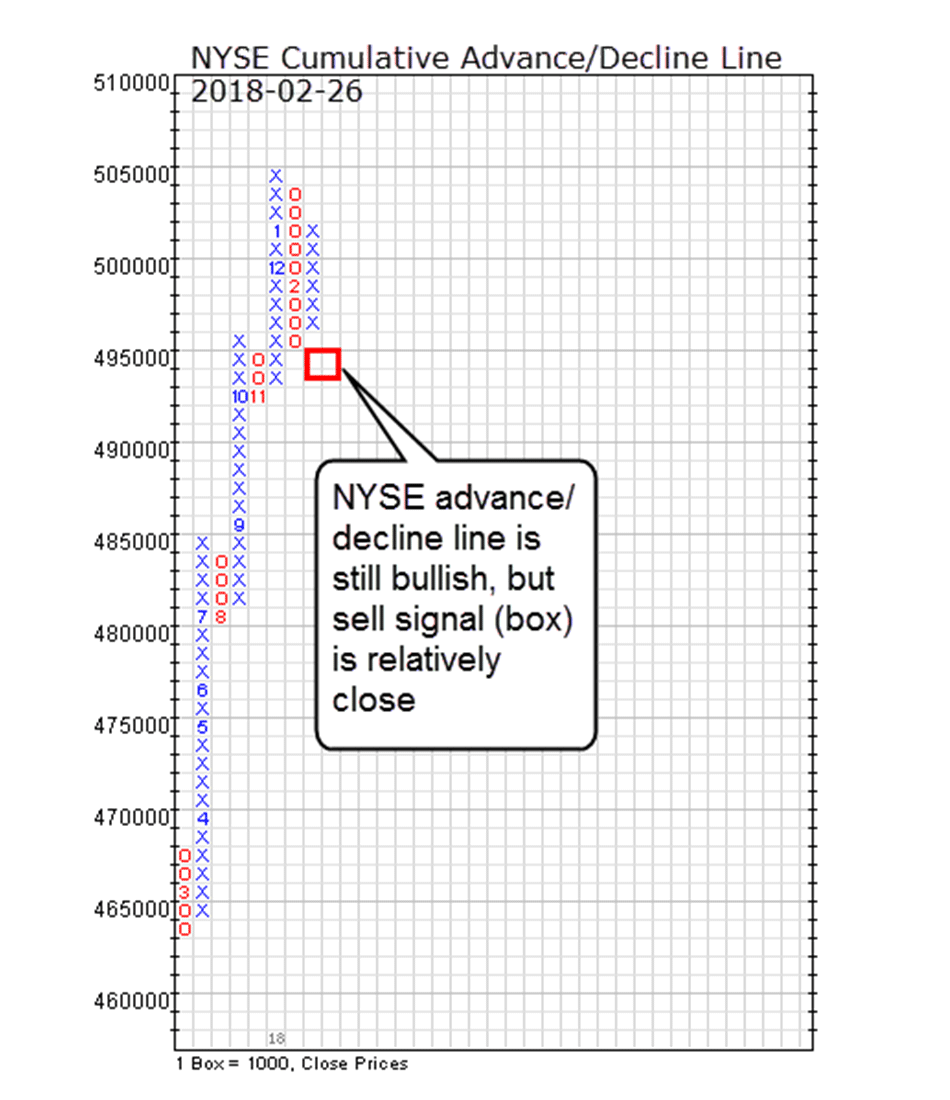 Was February’s market decline just a shot across the bow to wake everyone out of their bullish complacency, or a sign of something more serious? At present the indicators are mixed, but certainly not as uniformly bullish as they started the year. The improvement, or deterioration, in the above indicators will be our compass in guiding investor portfolios in the months ahead. Moreover, any readers wishing to get an update on these indicators are welcome to contact our office by phone or email any time.

We welcome the end of the free lunches that investors have come to take for granted since 2009. Their passing will restore a more realistic risk/reward balance to the financial markets. When there seems to be no penalty for taking risk, investors will get conditioned to that attitude, and risk-taking will prevail. But in the end comes the all too predictable consequences of mindless risk taking. Investors who have counted on a free lunch would be well advised to remember the words of American columnist Franklin P. Jones, who wrote, “When you get something for nothing, you just haven’t been billed for it yet.”

Andre Ratkai - February 26, 2020
William McChesney Martin was one of the longest-serving Chairman of the US Federal Reserve, serving from 1951 to 1970.  The…
Continue Reading

A Demon of Our Own Design

The Night Before Christmas (Remix)

Andre Ratkai - December 26, 2019
With apologies to Clement Clark Moore, the author of “A Visit from St. Nicholas” we have updated his timeless poem…
Continue Reading

Trade War at the Crossroads

Andre Ratkai - November 26, 2019
The corkscrew path of trade negotiations with China were dealt another twist in late November by the passage of the…
Continue Reading

Angels on the Head of a Pin

Andre Ratkai - August 29, 2019
Wall Street is fervently trying to figure out the answer to one overarching question this summer: Are we heading into…
Continue Reading

Andre Ratkai - July 30, 2019
It is not news that there is a very short-term perspective on Wall Street, in the business community, and among…
Continue Reading 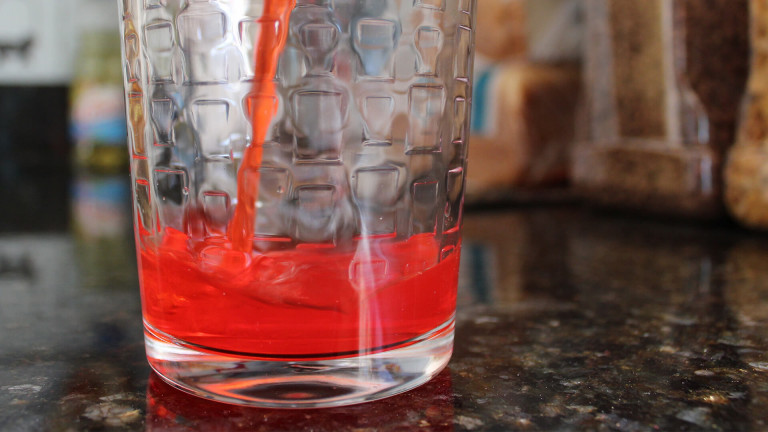 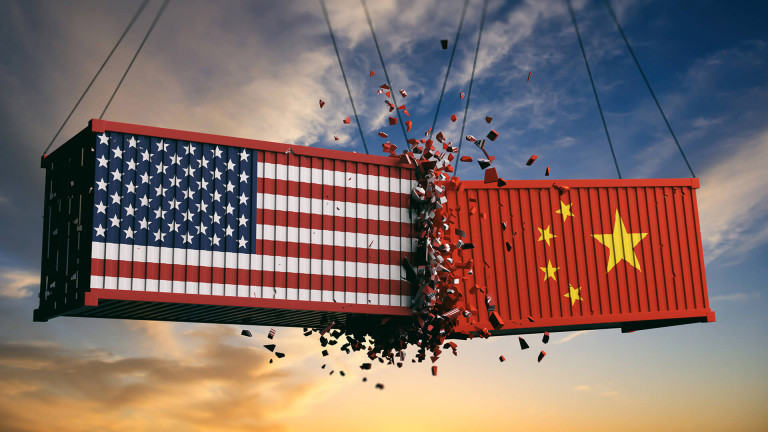