The month of Thanksgiving gave Wall Street’s bulls little to be thankful for, as the bearish conditions that started in October continued to dog investors. The boastful confidence that prevailed in the first three quarters of the year have been replaced by a nervousness that maybe the bull market is ending. It is no surprise to see this shift in sentiment, as all the major indices have given up their positive gains for the year, and just as suddenly, economic reports are coming in with less robust readings than the first half of 2018. Moreover, whispers of a possible recession in 2019 are starting to be heard, as the Federal Reserve has reiterated its commitment to gradually raising interest rates, and upward pressure on wages and raw materials costs are having an impact on company profitability.

Wall Street analysts are working overtime to predict whether the fall in the stock markets presages a recession. After all, stock market indices are included as a component of the Leading Economic Indicators (LEI), and one of the most historically reliable in terms of forecasting the direction of the economy. A quick glance at the LEI over the past year should give recession worrywarts pause, as its direction continues in a positive upward direction. Moreover, recessions have historically occurred when the six-month moving average of the LEI has turned negative. The LEI has historically dropped below its six-month moving average anywhere between 2 to 15 months before a recession, so for right now at least, the threat of recession remains at bay. Happily for investors, we can track the LEI on a monthly basis, along with its six-month moving average, at www.DShort.com. (Click the Updates tab, then scroll down to General Economic Indicators, or follow this link to LEI). 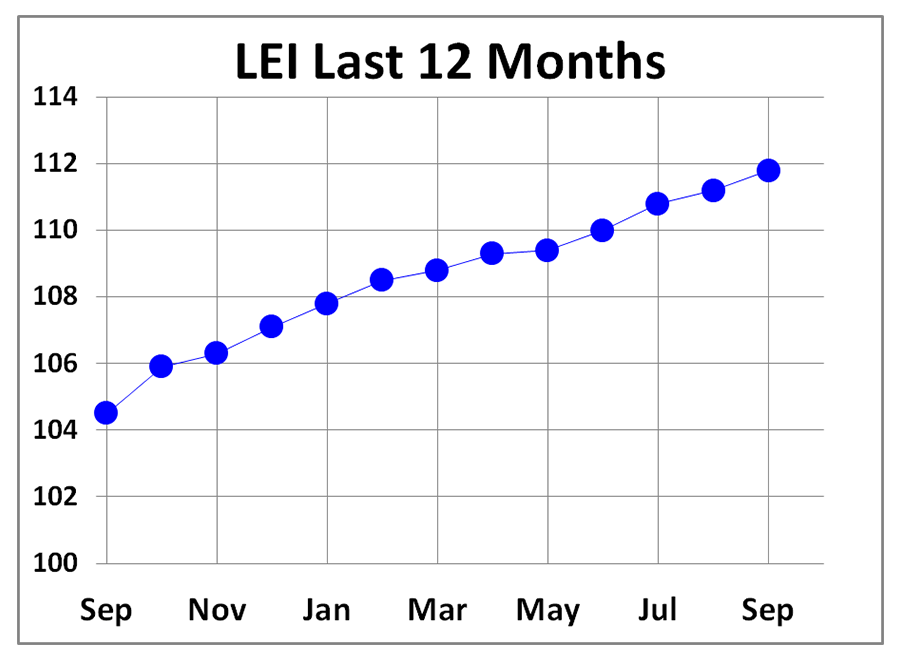 Investors can take some solace in the fact that the market is following a well-worn sequence during this decline. In typical fashion, the small and medium company stocks began to decline first, then were followed by the large and mega-cap companies that dominate the S&P 500 and Dow Industrial indexes. The market favorites, which mysteriously become viewed as invulnerable to market forces, finally finish the sequence with major declines of their own.

We need look no further than Apple Computer to see this phenomenon play out. During the summer, even as its popular peers such as Facebook, Amazon, and Netflix faltered, Apple stood out like a rock of Gibraltar, impervious to the increasing number of downturns, attracting ever more buying. It seemed as if Apple could do no wrong, but finally it, too, caved in, dropping some 27% over the last two months. Financial pundits breathlessly proclaimed Apple was in a bear market and predicted the end of the smart phone as we know it. What they overlooked was that this is all part of the typical sequence of bearish declines. Rather than lament Apple’s downfall, we should actually welcome it, because it indicates we are probably closer to the end of the selloff than the beginning.

Since 2011, we have kept a weekly tally of stocks above their major uptrend lines, using point-and-figure (p&f) charting. The major trend line on a p&f chart is always 45 degrees in slope, and has the remarkable quality of being able to capture turns in the major trend in a timely manner. It is not perfect, just pretty good. The current reading of the 1700 stocks in the database is now 43%, meaning only 43% are above the major trend line. This has dropped rapidly from early October, and supports the view that bearish conditions probably will prevail for a while. Previous market declines ended when this measure reached 30%, but surely it went lower during the big bear markets of 2002 and 2008. 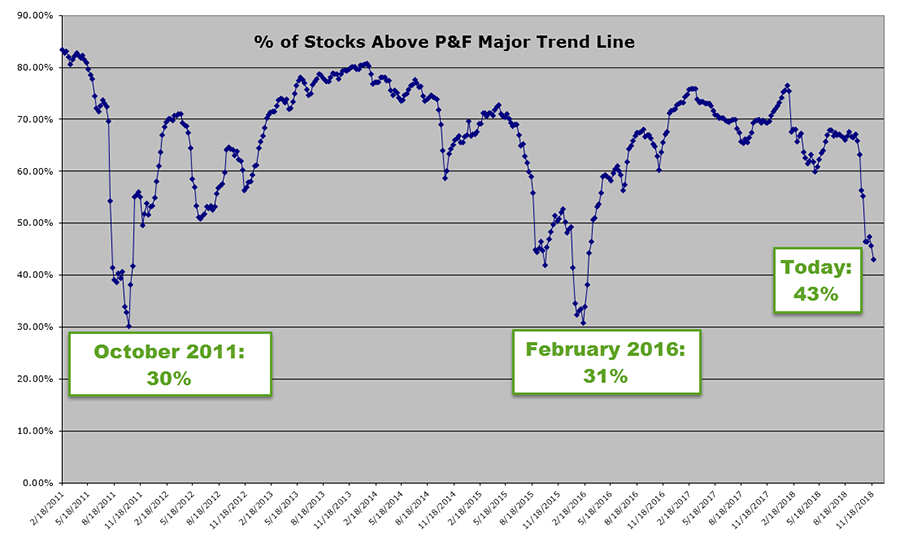 Another natural sequence of a market decline is the rise of pessimism. This is harder to quantify, as we are measuring human emotions, but there are several ways to capture the mood of investors. One of the most long standing surveys of market psychology comes from Investors Intelligence, which has been tracking the opinions of newsletter writers since the 1960s. Originally, they thought that high bullishness would be bullish for the market, but they discovered the opposite to be true. This was probably the first quantified effort in what is now known as behavioral finance. It has become an axiom of investing that when the crowd is extremely bullish, that’s a negative from a contrarian point of view.

Current sentiment readings from Investors Intelligence show pessimism rising quickly, with bullish advisors falling to 38% (down from 60% in early September). This indicates that the process of rebuilding “the wall of worry” is well under way, though it would be naïve to assert it is complete. Bullish sentiment saw lows of 25% (2002) and 22% (2008) before those bear markets ended, so if we are in a much larger down trend, we should expect gloom over the market’s prospects to become even more widespread.

Investors can also look at the general tone of articles for anecdotal evidence of market mood. Over the last month, most articles in the financial press have taken a decidedly dark turn, feeding the urge among investors to liquidate and sit on the sidelines until the smoke clears. Some large brokerage firms have even publicly recommended recently that clients sell and raise cash in an effort to put portfolios in a more defensive posture. This is a rare admission, since brokerage firms are congenitally bullish in their recommendations.

Rounding out the list of market doomsters was the Pied Piper of finance, Jim Cramer, the popular TV host. On November 20, he published an article titled “You’ll wish you sold at these prices if the Fed hikes rates in December,” which went on to lay out the case for a developing bear market, saying “There’s just a lot of bad. I mean I’m not going to hide it. There’s just a lot of bad. It’s a bear market.”

Public suggestions to sell tend to come at the end of a decline, and as such, indicates that we are perhaps farther along in the unfolding bearish cycle than most people believe.

But while sentiment and the drop in market leading stocks fit the sequence of typical declines, there are several factors that need to improve before the all clear signal can be given. Primary among these are the NYSE advance/decline (a/d) line, and the NYSE Bullish %.

The NYSE a/d line has given a sell on its p&f chart. This chart uses a 2-box reversal (instead of traditional 3-box reversal) to increase the detail and granularity of the trend. It fell significantly from October to Thanksgiving, and is now oscillating back and forth as investors’ outlooks change from positive to negative on an almost daily basis. One characteristic of bear market rules is that rallies will tend to be brief, and declines will drag on for many days. This certainly was the case for the last two months, but now the small bit of stabilization we are seeing may indicate a shift in the wind. However, we can’t call the a/d trend positive yet, and would urge investors to exercise patience before doing any broad-based buying. A buy signal on this chart will occur at 514,000 (arrow), which is at least a week or two away. 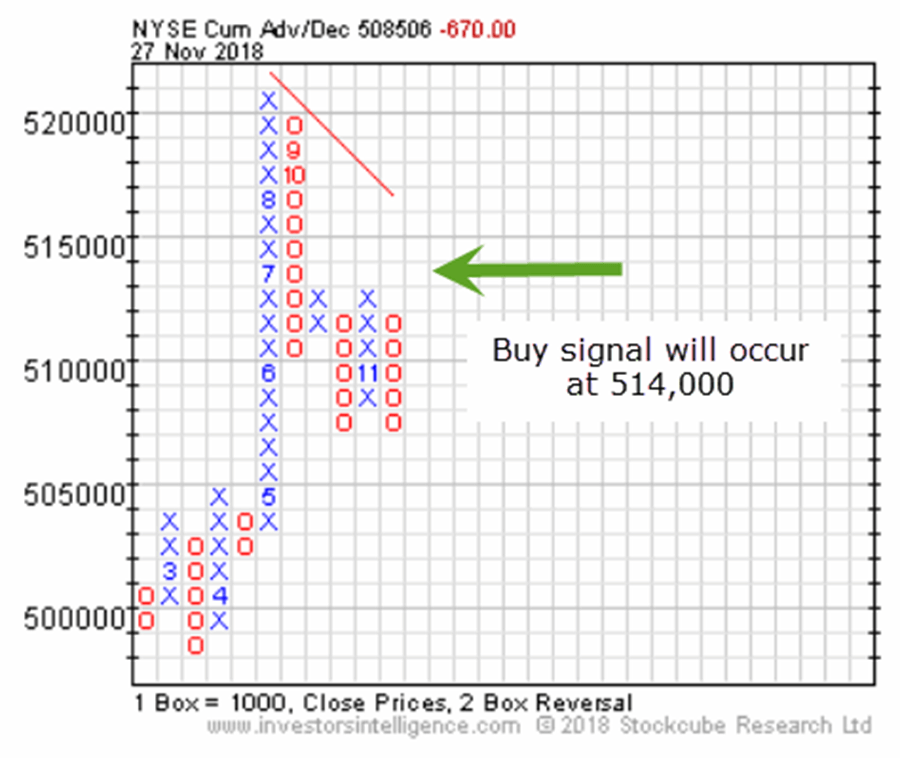 The NYSE Bullish % measures the percentage of issues on the NYSE that are on buy signals, based on p&f charting. This gauge dropped from a bullish 72% to mid-50% levels earlier in the year, and has now taken another leg down to a current reading of 36%. This means that 64% of NYSE issues are on sell signals, not the stuff bull markets are made of. Moreover, the Bullish %s for other major indices are at similar levels: S&P 500 (38%), NASDAQ 100 (42%), and S&P Small Cap Index (32%). It will take some time for these measures to turn positive, so again, we would urge investors to assume that bear market rules still apply until more positive signals confirm that an uptrend is in place. Any reader wishing to get updates on the a/d line or NYSE Bullish % should feel free to contact our office at the email below. 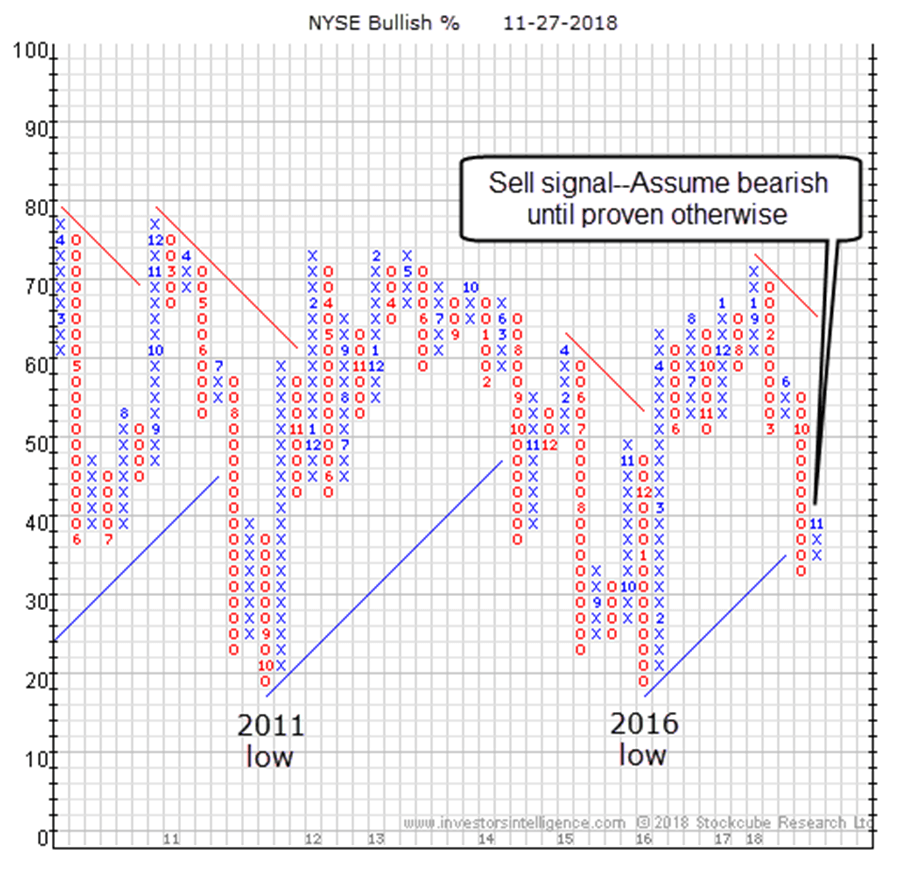 The normal sequence of emotional and psychological indicators is playing out as expected as the market has trended lower these past two months. But there is more work to do for the bull to get back on track. Fundamental risks such as overvaluation and excessive margin debt still loom over the markets, so investors should wait for clear signals from the a/d line and Bullish %s before assuming the trend has reversed upward. When bear market rules apply, buying the dips or anticipating a bottom can be hazardous. Nonetheless, investors should take comfort in recognizing that the typical sequence of events is unfolding, and observation, not anticipation, will be the key to making good decisions in this environment.

1 thought on “Sequence of Recovery”