As every good husband knows, there are a few dates that you dare not forget, and one’s wedding anniversary is key among them. The truly ideal husband will also know what gift is associated with the anniversary year one is celebrating. A gift of paper is traditional for the first anniversary, cotton for the second, and so on, up to pearls (30th), gold (50th), and diamonds (60th). On this, the tenth anniversary of the fall of Lehman Brothers, the appropriate gift would be of tin or aluminum. But stocks are acting if they are made of Teflon.

US stocks have had to endure a barrage of bad news that would normally have knocked them down for a healthy correction. The imposition of tariffs, and the threat to impose more, a tumultuous White House, and rising inflation and interest rates have done little to blunt the appetite investors have for large-cap growth stocks. Even the Federal Reserve’s “quantitative tightening” efforts have caused the merest of ripples in the upward trajectory of this popular sector.

It is easy to see why stocks have been impervious to developments that would have dented less robust markets. First, bumper profits from a booming economy have encouraged companies to expand and invest. The virtuous circle of more spending leading to more hiring has taken hold, with company profits surging and wage inflation starting to become evident. Indeed, the economy is so good that the US now has a job opening (6.6 million) for every unemployed person in the country, a sign of how far the nation has turned around from the recession of ten years ago.

Second, the tax cut of 2017 proved a boon not only for profits but also corporate cash flow. Lots of that money is being spent buying back stock in the market. This provides an even further fillip to earnings growth, as the same profits are spread out over a shrinking share base, thus making earnings per share look better than they would in the absence of buybacks.

Finally, the developing trade war has had a profound effect on foreign markets, but in a very different way. Foreign markets are down for 2018 anywhere from negative single digits to those that are clearly in bear markets. The trade war is being felt keenly overseas, with European indexes down 3.5%, German stocks down 6%, and major 2018 declines in Hong Kong (-11%), Latin America (-14%), and China (-19%). With returns like that prevailing, investors have little incentive to go overseas. Their dollars keep getting pumped into the US market, and it is increasingly becoming the “only game in town” for stock buyers.

But on this “Teflon Anniversary” of the bursting of the credit bubble, it is striking to note the similarities between today’s environment and that of 2008. Moreover, if we look back a little further, we find we are also celebrating the eighteenth anniversary of the 2000 bull market peak. Commonalities exist in the environment that preceded each of those two peaks compared to today.

The economy in all three cases was going great guns. Unemployment reached a generational low in 2000 of 3.8%, while in 2007-08 it was under 5%. Today, unemployment has dipped down to 3.9% as companies hire any qualified worker to meet demand. In all three cases, the economy was heavily stimulated by the Federal Reserve through aggressive monetary policies. While nothing can compare to the mega-stimulus of “quantitative easing” from 2008 to 2014, the Fed had a clear influence on the economy and markets in the lead up to the previous peaks. In the late 1990s, fears of Y2K computer problems in the banking system prompted the Fed to make liquidity readily available, much of which found its way to Wall Street, helping feed the bull market at the time. During the mid-2000s, the Fed was slow to raise rates after the harrowing bear market that ended in 2003, and as a result let speculation get out of hand again in both stocks and the real estate markets. Today’s financial markets have been boosted by nearly a decade of ultra-low interest rates, and the borrowing binge that has resulted. Finally, corporate profits were rising nicely before each peak, as they are today, as the positive cycle of spending and hiring unfolded.

Reflecting on these examples makes it clear that the economy did not provide clear warning signals in advance of the bear markets that eventually occurred. How did they happen, then? While each economic and market peak is unique, they have many of the same characteristics in common. Investors today should be aware of these factors and monitor their potential to affect the markets in the months ahead.

High valuation continues to be the Number One reason for long-term investors to be mindful on this anniversary of Lehman’s demise. Based on a composite of four valuation measures compiled by Doug Short (www.dshort.com) we have far exceeded 2008’s peak valuations, and are just a stone’s throw away from the all-time high valuations seen in 2000. While the bulls can rightly point to rising profits as the catalyst for today’s uptrends, stock prices have risen even faster, putting price/ earnings ratios and other fundamental yardsticks solidly into overvalued territory. We have pointed out this measure in previous Market Outlooks, and there has been no reaction by investors (yet) to implications that the scale of this risk represents. 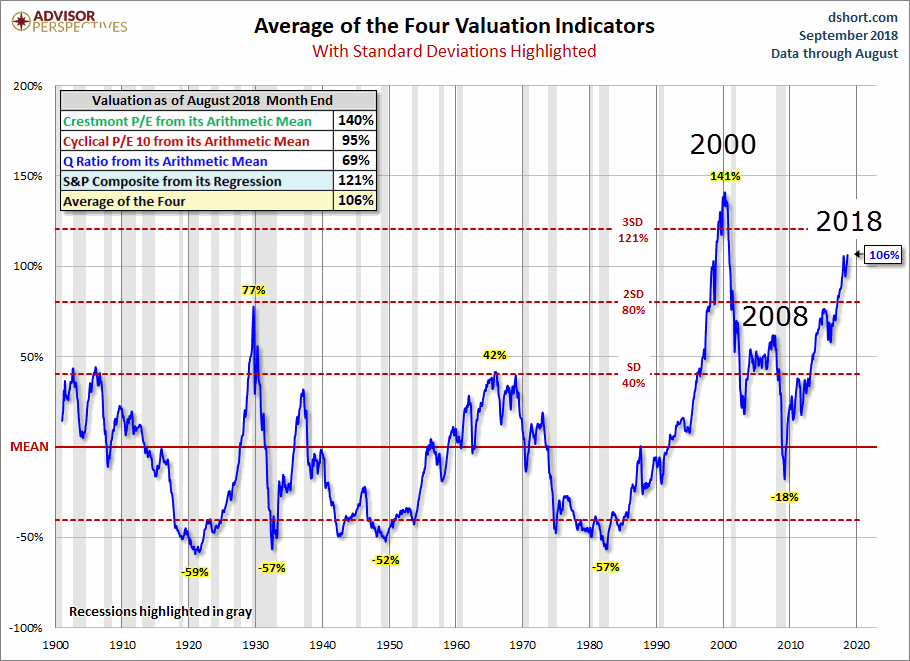 There has been recognition of the risk, as hardly anyone on Wall Street would argue that stocks are cheap. Large firms from Goldman Sachs and Morgan Stanley on down have begun to publicly issue cautionary research pieces to their clients. This too, has similarities to the 2000 and 2008 peaks, when the risks at the time were an open secret among investors, but were largely ignored in a sort of willful blindness until after the bear markets were well under way.

Current bullish sentiment reflects this attitude. In early 2018, bullish and bearish sentiment, as measured by Investors Intelligence, reached extremes just prior to the Dow Jones’ two 1000-point drops within the same week of early February. But in keeping with the Teflon-like character of the markets, stocks have clawed their way back to their previous highs. Bullish psychology has followed suit, with the percentage of bulls now reaching 60% and those of the bears at 18%. These are not at the extremes reached in January 2018, but they do reflect heavily bullish attitudes, a negative from a contrarian point of view. Herd mentality has a powerful sway over the behavior of investors, and today’s sentiment readings reflect the same psychology that prevailed ten years ago.

The market peaks of 2000 and 2008 were also characterized by excessive levels of debt, and the same is true today. Current levels of leverage, though, dwarf anything we have seen in the past 20 years, as corporate and government debt have reached new heights, and margin debt, used to leverage stock purchases, has reached all-time highs. 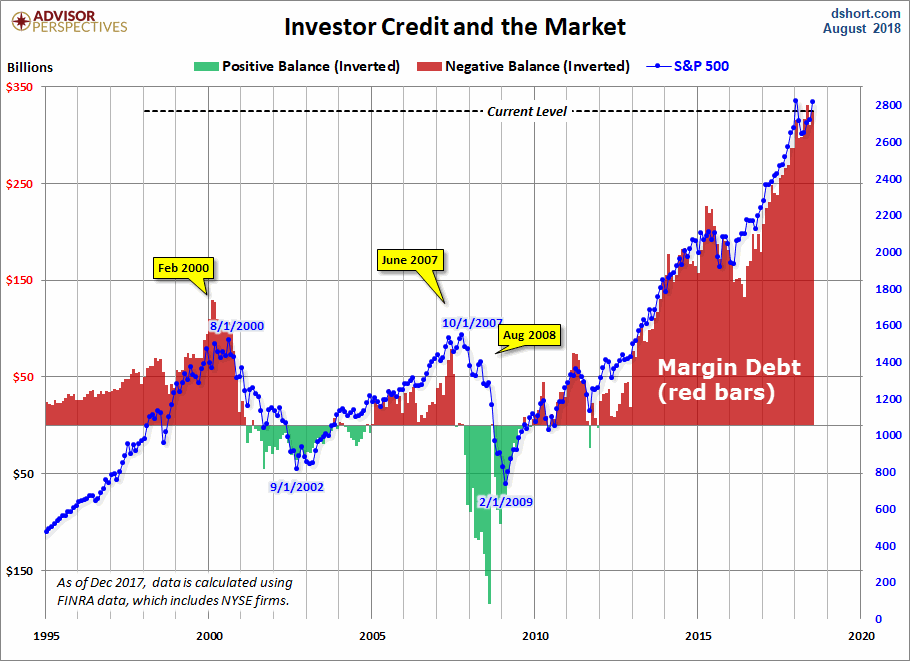 If we look back at the single biggest factor that causes market declines to snowball into full blown bear markets, it would be leverage. As asset prices rise, of course, leverage becomes an acceptable way to magnify returns, and is usually reinforced by long periods of success, bringing in more players and more leverage. This can continue until there is some disruption to the ability of borrowers to repay the debts owed. Then the process works in reverse, causing asset prices to fall as liquidation, rather than accumulation, becomes prevalent.

In 2000, of course, Wall Street investors were heavily leveraged in internet and technology stocks, and when marginal companies began to fail and pull down the rest of the sector, this strategy contributed to the severity of the 2000-03 downturn. Likewise, in 2006-08, it was the financial and mortgage companies that were the focus of the leveraged strategy, and once we started to experience defaults in the mortgage market in 2007, the entire strategy unwound in spectacular fashion. We are more leveraged today in the financial markets than we were in either 2000 or 2008, and while the catalyst for a decline can’t be known at this time, we have no doubt that excessive margin debt will contribute to the speed and severity of the next major bear market.

Until then, investors are enjoying a market that seems impervious to trade wars, rising interest rates, and clear risks of overvaluation and overleverage. Perhaps the most profound message from the Teflon Anniversary of Lehman’s fall is that progress in financial markets is cyclical, not cumulative, and that investors without sticky memories are destined to learn the lessons of 2000 and 2008 all over again.