Up the Down Staircase

While it wasn’t a very merry Christmas for Wall Street, it has certainly been a happy New Year. After plumbing the depths of bear market lows during the December sell off, stocks have bounced back as if they were attached to a rubber band. Double-digit declines of 2018’s final quarter were somewhat offset by double-digit gains in the opening month of 2019. This has led to a rush of pronouncements among market pundits that the bear market was over, and it was time to aggressively buy. But is this advice justified? Have the excesses wrought by nine years of artificially low interest rates been wrung out of the system by a mere three month decline in stocks? Wall Street is well known for having the attention span of a three-day-old weasel, and so are quick to extrapolate any short-term trend many years into the future. Thus, it’s important during these times of potential transition to look at the longer-term view. And the message of the bigger picture is that we may just be going up the down staircase.

One of the simplest, yet most powerful, indicators of trend among securities is whether their prices are tracing out a pattern of higher highs over time. A pattern of “higher highs” and “higher lows” in prices is bullish. It indicates that demand, not supply, is in control, and is strong enough to push prices to new peaks on each successive surge. Importantly, that demand brings buyers in at correction lows in price that are higher than the previous price low. This pattern looks like an up staircase, with each tread above the previous one. This basic pattern was the foundation of the Dow Theory, formulated by Wall Street Journal founder Charles Dow in the 1890s.

The converse of this pattern looks like a down staircase, where each successive low in prices is lower than the previous low, and each rally high falls short of the previous high in price. The “lower high, lower low” pattern is indicative of a long-term bearish trend. This is the situation we find ourselves in today. While the rally in January has been exuberant, to say the least, it still has not broken the pattern of lower highs and lows, and our assessment is that we are still on the down staircase. 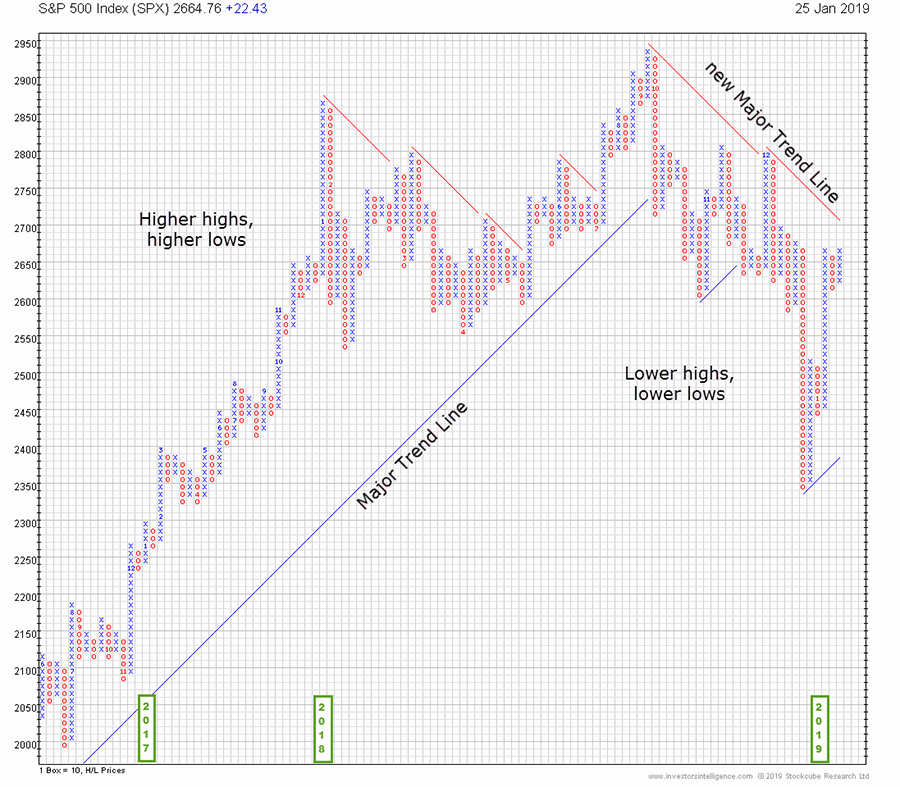 The chart above, depicting the S&P 500, shows the current trend of the market. This pattern is being mimicked by all major indexes, mutual funds, and most individual stocks. The rally from the lows of early 2016 showed an up staircase pattern, but that changed last November when the markets failed to get to a new high (the “lower high”), then began to set a series of lower lows that culminated in the dreadful Christmas Eve decline of some 3%. The 2019 rally, depicted in the righthand columns of the chart, has been strong, but not enough to break the down staircase pattern. We can have greater conviction that this is a true trend change because the Major Trend Line has been broken by recent price action, and a new, downward sloping trend line has begun.

Happily, the point-and-figure (p&f) charting technique allows us to see the big picture clearly. By eliminating the noise of small fluctuations, we can focus on the price movement that matters. In this case, identifying the low and high points accurately is key to judging whether we have moved onto the down staircase or not.

Moreover, the Major Trend Line of a p&f chart allows us to broaden our view to see what the long-term trend is, and put the ups and downs of the basic p&f chart into perspective. In p&f charting, the Major Trend Line is always a 45-degree slope, up or down. This rule, and the geometric nature of p&f charts, make it very easy to draw trend lines and have them be accurate. An upward sloping trend line serves as a floor under prices, while a downward sloping one serves as a ceiling (or “resistance”) above prices. The Major Trend has an uncanny ability to identify major changes in the long-term direction of securities, and thereby offer a quantifiable tool to assess risk.

How does the Major Trend serve as a risk management tool? We need to go back to our Geometry 101 class in high school for the answer. As you recall (you do remember geometry, don’t you?), the definition of a 45-degree line has a “rise over run” of 1. In other words, for each one-unit up move on the vertical axis, you must have a one-unit rightward move on the horizontal axis. If you maintain this relationship, you will have a 45-degree line. 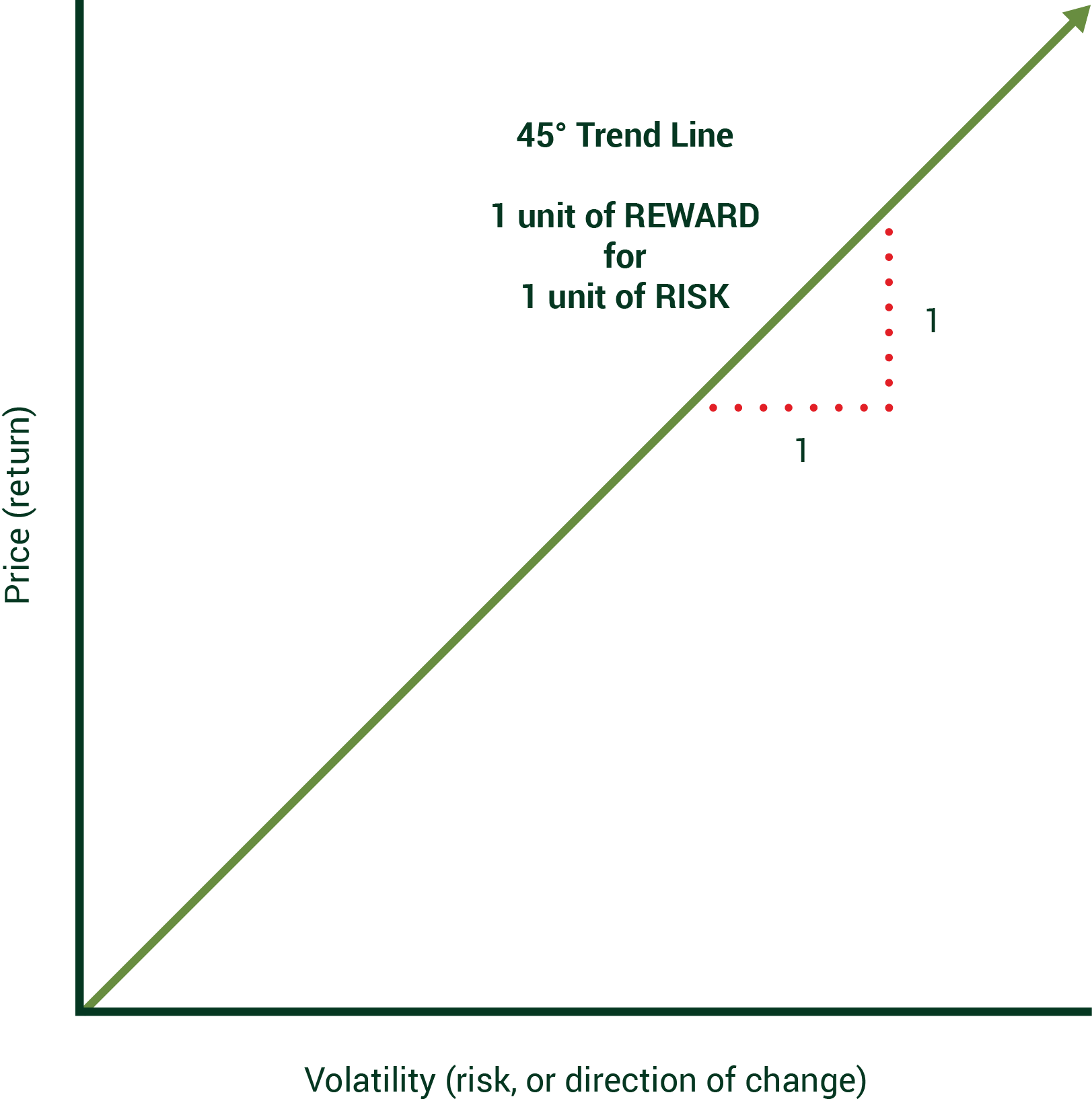 Let’s translate this to investing by substituting return for the vertical axis and risk for the horizontal axis. If we then plot stock prices, we find that in order to stay above a 45-degree line, we must get one unit of reward (vertical) for each unit of risk (horizontal) we take. The rise over run formula works for securities prices as well as geometry, and has the valuable perspective of telling us when we are no longer getting paid to take risk. When p&f charts, such as the S&P 500 chart above, shift into downtrends, or down staircases, they are telling us that we are getting negative units of reward for each unit of risk that we’re taking. We are still taking the risk (i.e. the up and down price movement that keeps adding columns horizontally across the page), but we aren’t getting paid for it. This is the biggest message to take away from today’s prevalence of stocks and indexes that are still in downtrends. Until this pattern changes, returns will be harder to come by.

What should we look for for this pattern to turn bullish? First, it is a well-known phenomenon that after a major decline, prices will “test” the low point before turning up for the long term. In other words, prices drop, but demand should be strong enough to keep them above the Christmas low point, about 2350 for the S&P 500. This is an important confirmation that the bottom is genuine. That has yet to occur, so we should expect a pullback in the next weeks or months that provides that confirmation.

Several key measures are improving or on bullish signals. The NYSE Bullish%, measuring the percentage of stocks on p&f buy signals, has turned up from the December lows. This signifies that the most essential element to renewing the bull market, an increasing number of issues moving to p&f buy signals, is occurring. It would be natural for this measure to oscillate back and forth a bit before giving a clear buy signal, as we saw in 2009, 2011 and 2016. That would be consistent with the need to test the December lows as described above. Nonetheless, it’s progress. 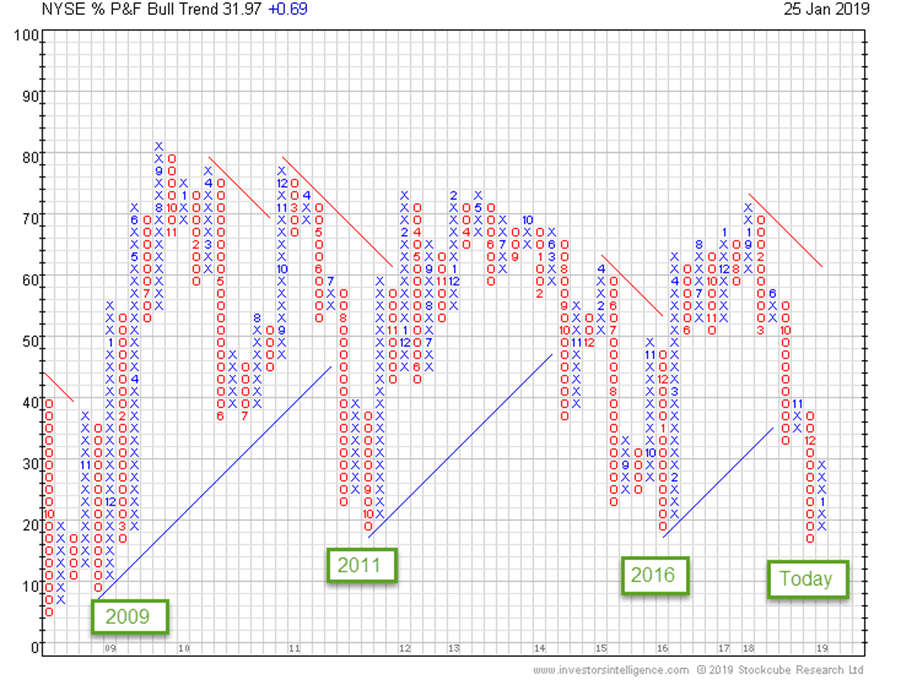 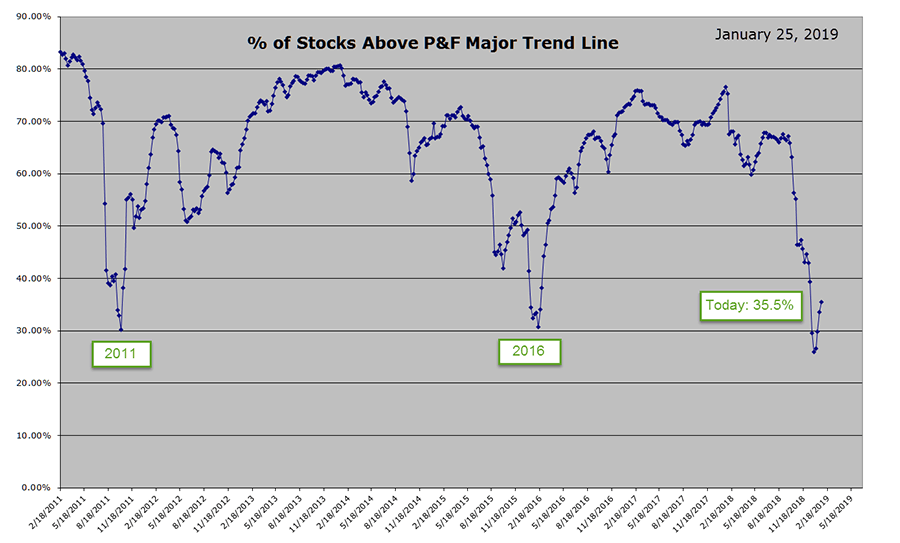 Finally, the NYSE advance/decline (a/d) line, which we’ve cited many times as a key indicator, has improved significantly from its Christmas lows. It is a glass half-full at the moment, as the daily calculation has given a buy signal, but the weekly calculation has not. It would give us more confidence in the bullish case if both were on clear buy signals, but if the market continues its rally, this could occur in the next week or two. 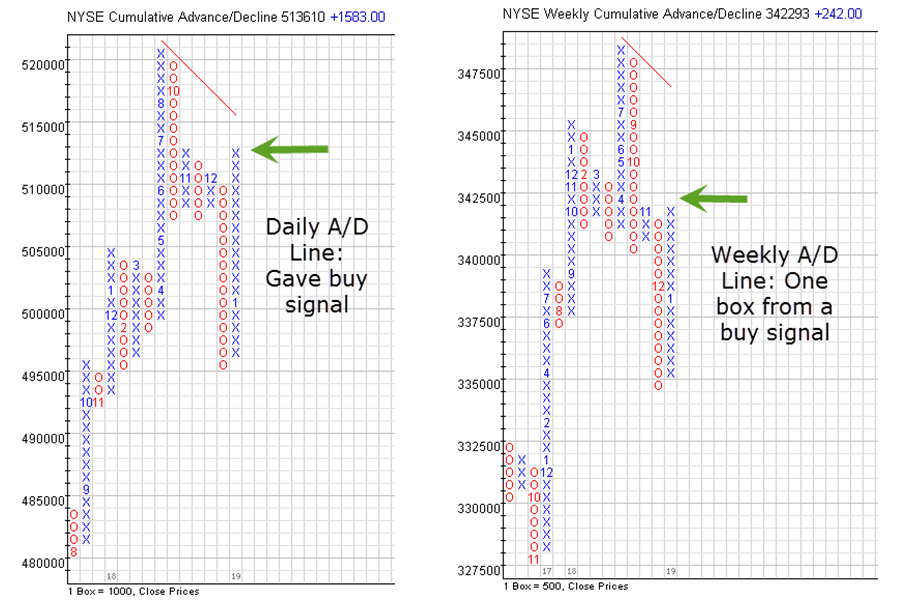 Stocks have shown a clear willingness to rally at the start of this year, all the more remarkable considering the external forces of the trade war, political tensions, and of course, the government shutdown. While we have recovered from the deeply “oversold” conditions of December, the majority of stocks and indexes remain on the down staircase, defined by the major trend lines. If we can break through these downtrends, the bullish case will be complete, but until then, investors should not take today’s bullish exuberance for granted.