The US economy has continued to impress. Measures of retail sales, industrial production, and corporate revenues and earnings are all showing solid advances for the first half of 2018. This firmer footing can be attributed to the business-friendly policies of the Trump White House, last year’s tax cuts, and generally rising consumer sentiment driven by a plentiful jobs picture.

The exclamation point on the vibrant economy was the latest GDP report, which showed the economy growing at an annualized rate of 4.1%, the highest since 2014. The sluggish, stop-start nature of the recovery from the Great Recession has given way to a more normalized recovery. In fact, the economy is showing many signs of late business cycle behavior, with reports of supply and material bottlenecks becoming commonplace, as are reports of transportation delays in getting goods to their end markets. But nowhere is the recovery more welcome than in the labor market. Unemployment has reached a cyclical low of 4%, and widespread need for labor has brought in many people from the sidelines who had quit the workforce in recent years. Today’s need for labor is reminiscent of the heady days of 1998-99, when the internet boom was in full swing and workers enjoyed the luxury of being in a seller’s market for their talents. Today’s tight labor market has finally begun to impact wages, with broad upward pressure on wages becoming the rule.

Wage pressure is adding to general inflation increases, putting the US Federal Reserve in a familiar, yet uncomfortable, position. With the latest inflation readings coming in at 2.9%, the highest in six years, the Fed finds itself in the familiar role of needing to keep a lid on inflation. They are doing this through interest rate hikes (much publicized), and unconventional tools brought on by their need to undo the “quantitative easing” (QE) policies of the last nine years (not so well publicized). It is QE that has them in the uncomfortable position of being way behind the interest rate curve. With the economy running on all cylinders, short-term interest rates are well below the rate of inflation, and therefore stimulative. In past recoveries, the Fed would have been raising rates more frequently, or by greater increments, than they have in this cycle. They are walking a tightrope between trying to get interest rates back to some normal, pre-recession levels, and doing so without choking off the recovery.

Evidence of the positive pressures brought on by a maturing economic cycle can be seen in the bond market, specifically what is known as the “yield curve.” The yield curve plots US Treasury yields across maturities from 30-day T-Bills to 30-year T-Bonds. Thus it provides a quick snapshot of the yields investors require to entice them to buy a specific term bond. Typically, the yield curve is upward sloping, with short maturities yielding the lowest interest rates, and long maturity bonds having the highest ones. This makes sense, since long maturity bond buyers have more risk that inflation will rise, or other factors may arise that affect the yield needed to compensate for risks perceived at the time. Thus, a “normal” yield curve has short-term rates lower than long-term rates. 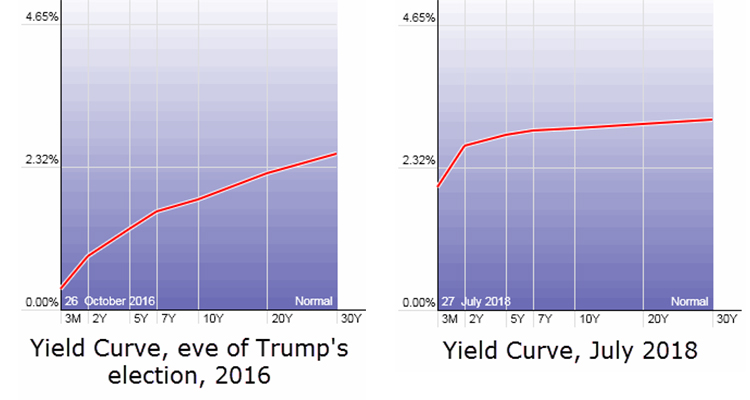 But the yield curve is a dynamic phenomenon, and shifts in expectations can alter the shape of the yield curve. In economic recoveries, as perceptions of rising inflation become ingrained, and the demand for short-term credit expands, interest rates for short-term bonds rise. This pushes up the short-maturity end of the yield curve as short-, medium-, and long-term yields start to cluster together. In very robust recoveries, inflation and credit needs can combine to push short-term yields above long-term. This is an infrequent, but recurring, configuration called an “inverted yield curve,” and is close to where we find ourselves today.

Inverted yield curves cause no end of heartburn for economists because they have frequently preceded recessions. There have also been numerous false alarms, where inversion was not followed by a recession, so it is not a foolproof economic indicator. Moreover, there is a long lag time between inversion and a recession. However, the track record of the yield curve is good enough to warrant attention, and we are much closer to inversion than we were just six months ago.

The message from the yield curve is really a message about the availability of credit. Business requires credit to finance inventory, accounts payable, and capital investment. In a similar way, households use credit cards to finance short-term purchases, cover emergencies, or bridge the gap between paydays. If that credit becomes unavailable, or more expensive due to higher rates, it can cause businesses and households to cut back their spending. Historically, the Federal Reserve has played a key role in influencing the yield curve. By raising short-term rates, they are seeking to keep a lid on inflation by dampening the demand for credit. This in turn helps mitigate the potential dislocations brought on by an economy that is running too hot, something we haven’t had to worry about for the last ten years.

Fortunately, there is a handy way for investors to keep track of the yield curve in real time. StockCharts.com provides free access to their Dynamic Yield Curve here:
https://www.stockcharts.com/freecharts/yieldcurve.php

The Dynamic Yield Curve allows investors not only to see the current yield curve, but to plot its progress since 1998. It is instructive to see its movement over time, and how the curve has changed shape leading up to the recessions of 2001 and 2008. We encourage investors to bookmark this helpful indicator for future reference.

We think investors should keep a weather eye on the flattening yield curve for another, more contrarian, reason: everyone on Wall Street is saying not to worry about it. Many prominent economic soothsayers are publishing reports to rationalize away the message of an inverted yield curve. When so many on Wall Street are saying the same thing, it’s a good idea to consider alternative outcomes. To cite a case in point, former Fed chair Ben Bernanke recently said we shouldn’t read too much into a yield curve inversion, as its historical message is distorted by today’s low interest rates (a distortion he helped create). This echoes an analysis he made years earlier….

“I would not interpret the currently very flat yield curve as indicating a significant economic slowdown to come, for several reasons. First, in previous episodes when an inverted yield curve was followed by recession, the level of interest rates was quite high, consistent with considerable financial restraint. This time, both short- and long-term interest rates--in nominal and real terms--are relatively low by historical standards.”

While it is possible that the yield curve gets truly inverted, we don’t believe it will stay there for long. We think that the economy probably has less of an ability to withstand a course of higher interest rates than it has in years past. Corporate America, and especially Wall Street, have become highly attuned to the availability of credit. It may not take much for the side effects of higher short-term rates to show up in these sectors. The Fed’s intent to spur recovery via borrowing has worked, but now leverage is high again, with record levels of margin debt in the stock market particularly stunning. In all events, the economy has become more interest rate sensitive due to high levels of debt overall.

Also remember that the Fed is currently becoming more restrictive by engaging in “quantitative tightening” (QT). QT is the process by which the Fed is shrinking its balance sheet by allowing their bond holdings to mature and then not replacing them. This reduces the amount of cash in the banking system. Of course, this is mostly invisible to the public, but is no trivial amount. The rate of balance sheet reduction has increased from$30 billion/month to $40 billion/month for 2018’s third quarter, and is certainly contributing to the flattening of the yield curve. They are well on their way down the path of tightening, and we should expect to see the effects of this policy whether the yield curve inverts or not.

The economy is on a roll, with seemingly nothing but blue skies ahead. But now signs reminiscent of previous business cycle peaks are coming to the fore, and while no single indicator has been able to flawlessly predict a recession, an inverted yield curve has correctly foretold of previous tightening credit conditions in the past, and the economic slowdowns that have resulted. The Fed’s experiment with QE has now come to an end, and investors should be mindful of changes to the yield curve ahead.